In light of recent Symbian developments and Nokia’s unwillingness to continue improvement of the Python runtime we are forced to discontinue work on GoogleVoiceForS60. We have, however, open-sourced the code to the app and posted it on Google Code. Sorry for the inconvenience and thank you for using the application so far.

Necessity is the mother of all invention. Google Voice is great service but without a native app for Nokia phones placing a call through the Google Voice number was a major hassle. In addition, I needed a proof of concept app for developing and deploying an app with the 1.9.x PyS60 runtime. The end result is GoogleVoiceForS60.

In a nutshell, GoogleVoiceForS60 pulls a list of all your contacts, dialed, received and missed calls from the phone and allows you to initiate a phone call or send a SMS message to one of these numbers by using the Google Voice API.

This application is a work in progress and as such it is in a continuing beta stage. It has been tested and is used in every day on the following phones: N97 NAM, N95-5 8GB and N95-3. In addition many users reported it works fine on E75, 5800XM, E71 and E71x phones. In theory it should work on all phones that support the pys60 1.9.7 runtime.

For privacy reasons the screenshots were done by running the emulator version. There might be slight differences in look and fee in the real application. 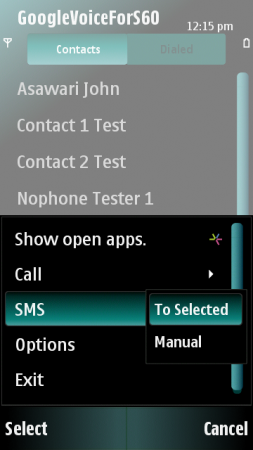 The video below demonstrates the application running on N95-4:

Please make sure to install all the packages to the same drive (it does not matter if it’s the c: or e: drive).